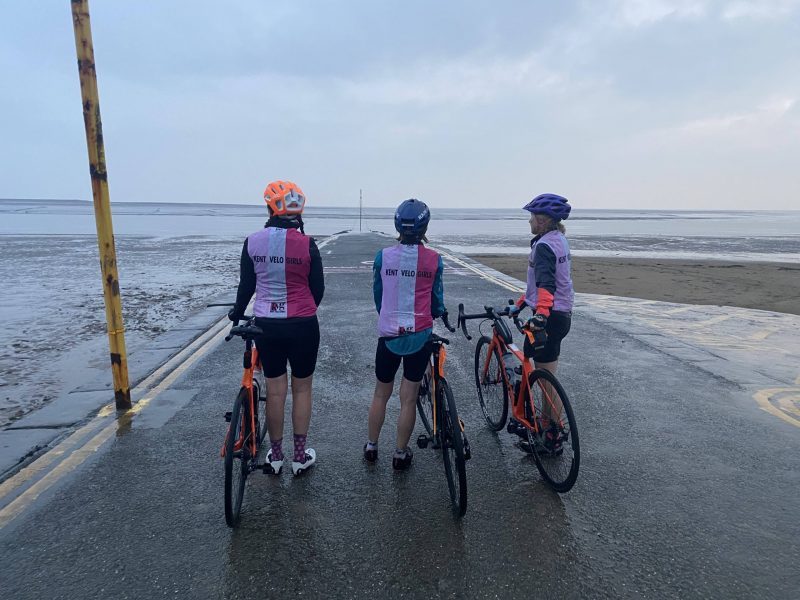 The first event I attended after I joined the Kent Velo Girls in 2018 was a ‘Goal Setting Evening’, at which Clare Midgley (one of KVG’s founders) talked about Chase the Sun, a self supported ride across the UK in the daylight hours of a single day, leaving at sunrise and aiming to arrive before sunset. The date: the Saturday in June nearest to the longest day. The distance: 205 miles!

I was truly inspired and even though I was a fairly novice cyclist at the time, I promised myself I would do this ride one day, as a number of KVG had done before me.

It was a few years until the opportunity came up. I’d had no plans to enter in 2021 but in my role as KVG’s Social Media Secretary, I found myself having a conversation with Chase the Sun (CTS) co-director Phil Webb. It was just 6 weeks before the event, but after talking to him I made the decision to sign up

I was originally going to do the ride unsupported and solo, which probably would have been a silly idea! Luckily, the Kent Velo Girls had my back. I mentioned my plans to fellow KVG Ruth who had done did CTS herself a few years beforehand and she straight away offered to support me on the day. CTS is an unsupported ride with no feed stations on route so having some kind of support is definitely desirable! I was amazed at Ruth’s generosity and her willingness to give up a weekend of her life to help me achieve my goal.

I then asked in the KVG Facebook group if anyone wanted to join me and was delighted when Janice said she would. A few hours later, Caroline (who having read the post that morning had declared CTS was something she definitely was NOT ever going to do) also agreed to join us! We were now a team.

Being only 6 weeks from the weekend of the longest day, we didn’t have much time to train. Entering such a long event at such short notice isn’t something I would recommend! However, all 3 of us had been regularly riding 100+ miles a week across the winter so we had a good base to start from. The difference with this ride was the added pressure of having to ensure our average speed was 14.5mph, or we would not make the distance before sunset. While this wasn’t significantly different to the speed of a KVG ride, to do it for so long and with over 9,000ft/ 3,000m of elevation felt daunting.

We sat down to compare diaries of when we could train together and we found just one free day for a long ride. The rest we would have to do alone, in pairs or on KVG rides.

Unfortunately the weather gods were not smiling on us for that one day. We headed out for our 130 mile training ride with thundery showers forecast all day, and within 10 minutes, the rain started and we were soaked to the skin. I found myself seriously questioning my life choices knowing that we had 125 miles to go in wet shorts!

During that day we rode in the worst conditions I’ve ever ridden in – there was lightening and hail and streets like rivers at times. What struck me most though was a total lack of any moaning when it was tough, and the laughter and smiles when the sun did come out. That, much more than the distance or speed we did, gave me confidence for the big day!

On the day, my alarm went off at 2.45am to allow time to travel to the start. Unfortunately, there was no glorious sunrise in Sheppy, it was a rather dull morning, but it was dry at least. We rolled out exactly at sunrise – 4.42am.

Our first leg was 45 miles to Bromley. The roads were of course very quiet except for all the cyclists, meaning we could make fast progress along roads I usually never would have considered cycling on. We were due to arrive in Bromley at 9.30am and rolled in bang on time.

Ruth and Fiona who were supporting us had a van loaded with everything we might need, and a detailed plan for the day. Throughout the day they were beyond brilliant, re-fuelling us at each stop, watching the weather, recharging our devices and ensuring we were on track time-wise.

One of the best moments was arriving in Bromley and seeing them for the first time that day, waiting to greet us with big smiles and the coffees we had asked for. We couldn’t have done it without them!

The day was thankfully free of any drama or incident. We kept a steady pace throughout and luckily had no punctures or mechanicals to contend with, allowing us to get slightly ahead of schedule, while still enjoying the route and the atmosphere. Getting across London was busy and not the type of riding we are used to but being amongst other CTS riders made it much easier and soon we were back out onto quieter roads and beautiful countryside.

We met some lovely people and had so many ‘Hey Kent Velo Girls!’ shout outs from other riders and loads of cheers from the supporters who were out on the route. It was particularly good to ride for a while with some members of Bella Velo Cycling Club as it’s not often we come across other groups of female cyclists while out on the road!

While this was the longest ride I’ve ever done and with the most elevation, the only point I found really hard was when we reached the 100 mile mark (which would usually feel like a really big achievement) and I realised we weren’t even half way. I’d just had some lunch and REALLY wanted to take a nap and for someone else to pedal for me for a while! But – I dug down and it wasn’t long before we were through that 30 mile section and at the next rest stop. From there it felt like we were on the home straight.

Beating the Sun – The Burnham on Sea Finish

The weather didn’t quite hold out for us and the rain started just as we had our last quick rest. Rain jackets went on but the advantage of a drizzly evening meant a tourist-free Cheddar Gorge with quiet roads. It was the best descent I’ve ever done. So totally beautiful.

By the time we arrived in Burnham it was pouring with rain and it was pretty dark, but it was actually 9pm which is 30 minutes before sunset. We had chased the sun and won!

I was blown away to see so many people standing there clapping and cheering in the rain as we came in. The town crier rang his bell for us as we rolled in and Ruth and Fiona were there with smiles and congratulations. The rain meant no stunning sunset and we were too wet to stay out for a celebratory drink but the sense of achievement was massive. It was a moment I will never forget, at the end of the very best of days in the saddle. It was actually really hard to believe that it was the same day as when we had set off.

Never did I imagine I would ride so far in one day!